Why put a turbo on a Cressida? Well, that's easy.....power. This car was given to me by a friend of my neighbor's because the transmission was bad. I got the tranny fixed and entered it in the Grassroots Motorsports $1500 Challenge where it finished mid-pack. I was rather disappointed to find out during the Challenge that it did the quarter mile in only 17.9s@79mph. Talking to a friend who owns MKII Supras, I found out that the Cressida is basically a Supra with a 4 door body and that the exhaust manifold and turbo from a MKIII Supra will bolt up pretty easily to the 5M-GE engine. There are a couple of very good resources on the web about this (Steve Lee has an excellent page at http://www.algorithmicdesign.com/5mgte/subpages/how.htm), which I read before finding a suitable donor vehicle in Orlando, FL. Bits in hand, I spent Xmas break, 99 installing and fabricating parts for the conversion. Post turbo, the car has run a best 1/4 of 16.3s@85pmh....not too shabby an improvement for $650 in parts and about 25 hours in labor. 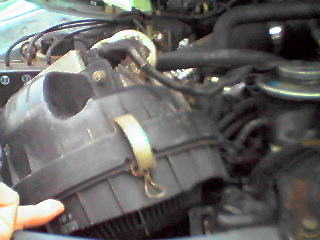 The stock airbox was cut to make it breathe better while allowing room for the intake pipes. While you can tell from this picture that I made anything but a clean, straight cut, this is one of the cheapest performance modifications you can make to the 5M-GE. The stock Toyota filter element does a great job, so there is no need to replace it with a 'high flow' element unless you want something you can re-use. In addition to opening up the intake for more airflow, opening up the box gives the car a pretty cool sucking sound under throttle (under boost, it scares children and the elderly). 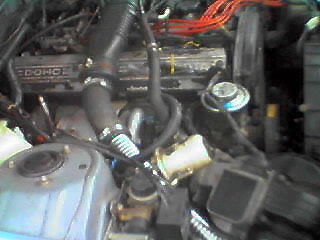 Flexible exhaust repair pipes make nice shiny intake pipes. These pipes cost about $5 per section, are airtight, and give gentle, flowing bends. The hose looping over the intake and back to the turbo is the heater supply line that provides coolant to the turbo. Cooling return line goes under turbo intake and then back to heater core. I have found that this is not the optimum way to route the cooling lines as there is a static head if the heater is not in use and the turbo gets no coolant circulation. This will be changed so that the turbo lines T off of the heater lines rather than use the entire line. The white canister in the center of the picture is a vacuum tank that has to be relocated so that the turbo intake pipe can be mounted. 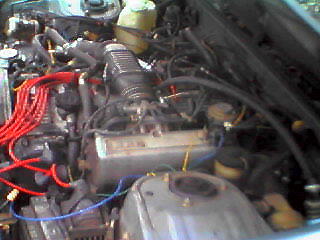 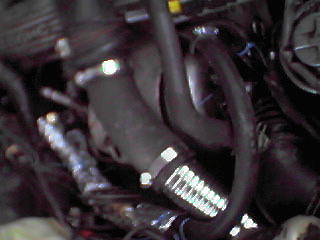 Rather bad close up of intake pipe and turbo water lines. The water lines were wrapped in aluminum foil to protect from exhaust turbine heat (even running them along the fender put them very close to the turbine).. 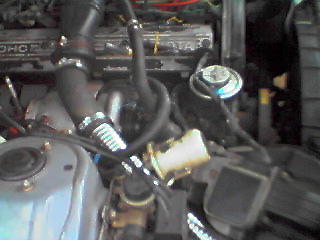 Just another shot of the conglomeration of bits that make up the turbo. 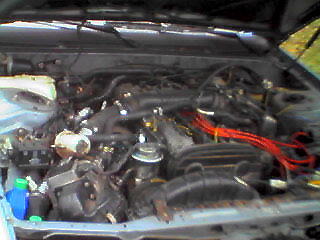 And a wider engine shot. What used to be a wide open space to the left of the engine is now jam packed with turbo bits. You can just see the intercooler pushed up against the front bumper at the bottom of the picture (it's a ridged black piece with a white zip tie near the middle). The intercooler intake pipe had to be routed under the lower radiator support (watch those curbs!) and the exit pipe is routed behind the left headlamp and through a hole cut in the radiator support (about 8" diameter hole...also feeds cool air to the air filter) 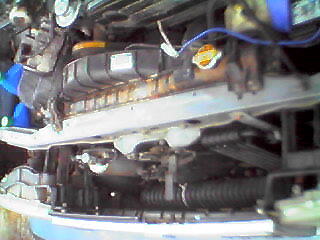 Other side of the front. The MKIII Supra oil cooler is bolted the radiator support just to the right of the latch mechanism. This piece isn't really necessary, but it came as part of the turbo parts package, so I figured I'd use it. Turbo cooling oil runs from the filter bypass valve to the oil cooler, then to the turbo, with the turbo dump pipe running to a hose that connects it to a union fitting on the oil pan. I have found that this is a TERRIBLE way to do turbo oiling as the bypass valve on the oil filter does not flow until the engine is around 1500rpm. Most people T off of the oil pressure switch, but I couldn't find the appropriate adapter to fit the block (nowhere in this small town sells metric fittings). The current plan is to remove the spring valve from the filter bypass so that it will flow oil all of the time. 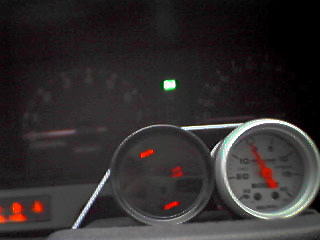 Never, EVER, add boost without a good gauge and air/fuel meter. I had a Cyberdyne Air/Fuel meter that I had bought for my Mr2 and never installed. This is a fairly simple install, with a wire going to the power, ground and the O2 sensor. Make sure you have a good sensor if you're going to turbo the car. The boost gauge is an Autometer ProComp Lite that reads a lot higher than I'll ever be taking this car.

I installed these two gauges before the turbo install to get a baseline and found that my car was running just under atmospheric pressure at wide open throttle, and full rich whenever the throttle was depressed. Based on this, I opted to install the turbo without using larger injectors or a rising rate FPR like the Supra guys have been doing. I was planning to run stock boost settings (5psi max), so I wanted to see if the stock fuel system could handle it. After turbo install, I found that the car runs stoic to rich under boost with occasional dips to a lean condition. Backing off of the gas in a lean condition runs it full rich instantly. If you even think of running higher than stock boost levels, you'll need to do some fuel system work. 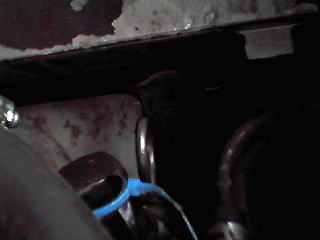 This is a really lame picture of where you have to grind the 7M exhaust manifold so that it will fit on the 5M. Just where the gasket curves down top center, there is a bolt that holds the engine lift hook. This bolt does not exist on the 7M and the manifold is cast in a straight line in that area. A semi-circle of about 0.5 inch diameter has to be ground off of the manifold to accommodate this bolt. Lay the 5M gasket on the 7M manifold and you can see what needs to come off. 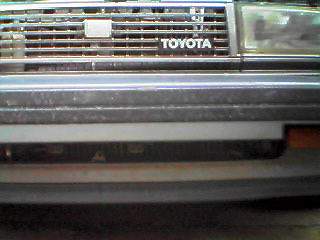 You can't see it in this picture, but the intercooler is JUST visible in the lower intake opening below the bumper. This is the only outward sign that this car is not running a stock engine. 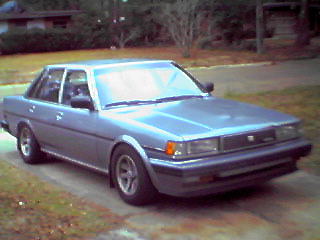 A pretty good sleeper, even with the Celica GTS wheels in place. Those wheels came with 235/60-14 tires that required rolling the rear quarter panel lips. They also rubbed on a front body seam that had to be hammered flat. I have since sold them and gone back to stock Cressida wheels to avoid these fitment problems.

I also fitted the Celica GTS springs. This resulted in an unacceptable drop of about 4.5 inches in the rear and 1.5 inches in the front. I then bought a set of MKII Supra Eibach springs (Pro Kit). The rear springs did not raise the car any, but stiffened it up enough that it doesn't rub on as many bumps as before. The front springs have not been installed yet.

Other issues that I've encountered doing this install on a Cressida:

The 90 degree oil filter adapter from the MKIII Supra must be used or you'll never be able to change your filter. The Cressida motor mount interferes with oil filter location and approximately 1/2 inch of the mount must be ground off so that the filter can be installed. There is also a long stud holding the bottom of the power steering pump in place. This must be loosened and moved forward every time you change the oil unless you cut the majority of the stud off.

There is very little room to mount the intercooler, and finding places to bolt it to the car is almost impossible. My intercooler is installed with zip ties...and it hasn't moved in 4 months.

The turbo oil dump is HUGE (about 7/8" diameter) and the union fitting (get the one from your MKIII Supra donor because a new one is about $80 from the dealer) on the pan is the size of standard oil cooler hose (about 1/2" diameter). I put a section of oil cooler hose, with coolant hose over that and finally the dump hose over top of both of those in order to use this union with such large hose. The only 7/8" oil hose I could find was special hydraulic line that was $14 a foot....

I made exhaust adapters from flexible repair pipe and a reducing tube. Using the manifold down pipe from the Cressida, you can cut off the last 8 inches or so where it bolts to the catalytic converter , run that through a reducing pipe to a flex pipe that bolts to the Supra down pipe (about 1/2" larger diameter pipe than the Cressida pipes). I did not replace the entire exhaust because I didn't want to run a lot of boost and this would help limit the boost level.

See notes with above pictures on cooling and oil lines to the turbo.

If you run higher boost than 5psi, I highly recommend 7M-GTE injectors or a rising rate FPR. A thicker head gasket is a good idea too if you don't do anything to compensate for the boost (retard timing, etc). My friend with the MKII Supra is running 14psi with an HKS 2mm head gasket and 4A-GE fuel injectors.

Update 12/2001: The Cressida Turbo was dismantled and sold last year in preparation for my move to CA. The turbo kit was destined for a MKII Supra and the car a used car lot in AL. It endured over 10K miles under boost with no problems at all...on an engine with over 160K miles on it.

See the beast in action! (735K) - An autocross in Pensacola during 2000. The car got sideways and I just planted the throttle to bring it around. That's tire smoke, folks....not exhaust.